Trump tweeted about a dying boy. Here’s what you need to know about his rare disease 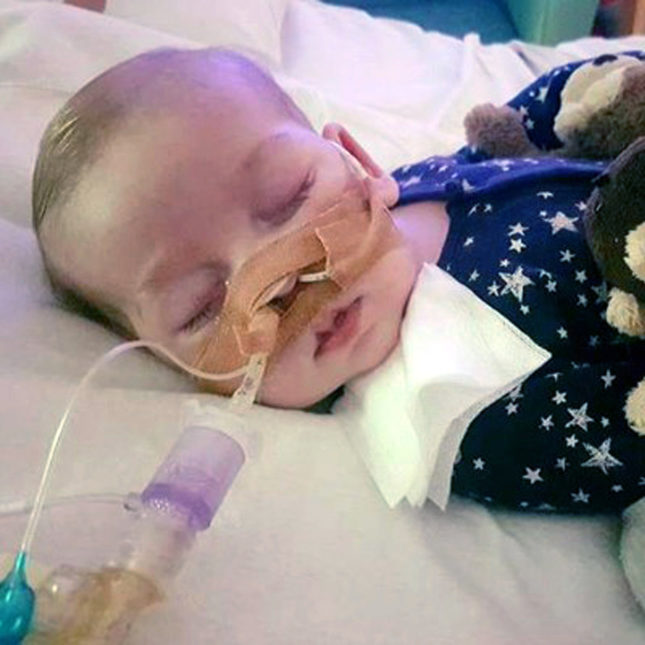 he tragic story of a 10-month old British baby who is on life support in a London hospital has focused a spotlight on an often-fatal rare genetic disease called mitochondrial DNA depletion syndrome. The case even caught the attention of President Trump on Monday, who tweeted that “if we can help” the boy, Charlie Gard, “we would be delighted to do so.”

Charlie’s parents have said they hoped to bring him to the United States for an experimental treatment, but a months-long legal battle gave Great Ormond Street Hospital for Children permission to withdraw life support, inciting condemnation from the Vatican to the White House.

A presidential spokesperson told reporters on Monday that when Trump learned about the boy’s case, he “offered to help the family in this heartbreaking situation. Although the President himself has not spoken to the family, he does not want to pressure them in any way, members of the administration have spoken to the family in calls facilitated by the British government.” Citing “legal issues,” the spokesperson declined to “confirm the name of doctor or hospital where the baby could be treated in the United States.”

But the father of an American boy with a similar disorder told STAT that he put Charlie’s parents in contact with the physician who successfully treated his son, Dr. Michio Hirano of Columbia University Medical Center in New York. Hirano did not reply to a question about whether he had been contacted.

Here’s what experts know about the disease and why Trump’s “if” is a big one:

What causes the disease?

How do you get it?

You must inherit two copies of the mutated gene, one from mom and one from dad. If you inherit only one copy, the healthy one is sufficient for ribonucleotide reductase function, but you are a genetic “carrier,” as Charlie Gard’s parents apparently are.

What are the symptoms?

Brain dysfunction, muscle weakness (encephalomyopathy), and, often, kidney dysfunction. Children don’t grow or gain weight as they should, have an abnormally small head, and because of muscle weakness typically have difficulty not only moving but also breathing. Charlie, for instance, cannot breathe or eat on his own. RRM2B-mitochondrial DNA depletion syndrome can also cause an inability to swallow, vomiting, and diarrhea. Children with it usually live only a few years

Has anyone been successfully treated?

The American boy with a related mitochondrial DNA depletion syndrome is stable and doing well, his father, Art Estopinan, told STAT. His son Arturito was born in 2011 with a mutation in the TK2 gene, another mitochondrial enzyme, which lies on chromosome 16.

So does that success bode well for Charlie?

After a long medical odyssey, Arturito’s parents took him to Columbia, where Hirano has been developing an experimental therapy, said Estopinan. Arturito initially received the DNA building blocks, nucleotides, to substitute for those his missing enzyme would ordinarily generate. Now he receives thrice-daily doses, through a gastrointestinal tube, of nucleosides, which differ from nucleotides by a single molecule: That allows them to cross into cells more easily, and once inside they are converted to nucleotides.

Has the Columbia researcher reported any of his results?

According to a recent animal study that Hirano led, the treatment consists of oral doses of deoxythymidine monophosphate and deoxycytidine monophosphate, which are converted to molecules required for the synthesis of mitochondrial DNA. In lab mice with the TK2 mutation, the regimen postponed the onset of mitochondrial depletion syndrome, reduced the severity of symptoms, and prolonged the animals’ lives. But no study of human patients has been published.

Hirano is currently recruiting patients for a clinical trial intended to establish a registry and biobank for mitochondrial diseases, but he has no studies registered at clinicaltrials.gov indicating that he is conducting a study intended to test experimental treatments.

Other experimental therapies are being tested in lab animals, but in general the most they can do is prevent mitochondrial loss from getting worse. If crucial tissue or organs have already been severely impaired due to crippled mitochondria, as is apparently the case with Charlie Gard, there is no evidence anything can help.

It’s extremely rare. By one count, only 15 cases have been reported in medical journals. Charlie’s parents have said he is the 16th.